The following review was supplied to us by Angelo Di Vito as an independent review of some of the glasses supplied by Edge Tactical.

Thank you Angelo for allowing us to use your review on our website.

A question I would ask of Airsoft players is, ”what is the most important bit of kit in your bag?” Now my answer would be eye protection as I’m sure it would be with most players. Now this is an area that is usually limited to two types, Perspex or other clear lens protection and mesh or alternatively a helmet with built in eye protection. I have used mesh for many years for the simple reason I could never find any clear glasses that wouldn’t fog up the second you get warm and start breathing. This is compounded if like me you like to wear a balaclava when playing…..It’s a nightmare. The one advantage mesh does have is that it can’t steam up but that is traded off against the chance of someone using crap BB’s and they shattering and going into your eyes. Another risk with mesh is the coating on the inside might not be great and flecks of paint could go into your eyes and you can barely see anything when the light fades. So my quest for Perspex glasses went on with me trying pretty much every brand on the market. Even with the claims of the makers and the use of anti-fog I got nowhere, admittedly I am a sweater. But then I was looking at the many Facebook posts from the IWA event this year when I came across a company called Edge Tactical Eyewear. They claimed like many others that they had designed Perspex eye protection that they guaranteed would not steam of fog up. Yeah yeah yeah I thought I’ve heard and read this all before but visited their website anyway. By the time I had gone through the website I was intrigued to know more about them and try them for myself a write up my findings. A big bonus was the products looked great too. 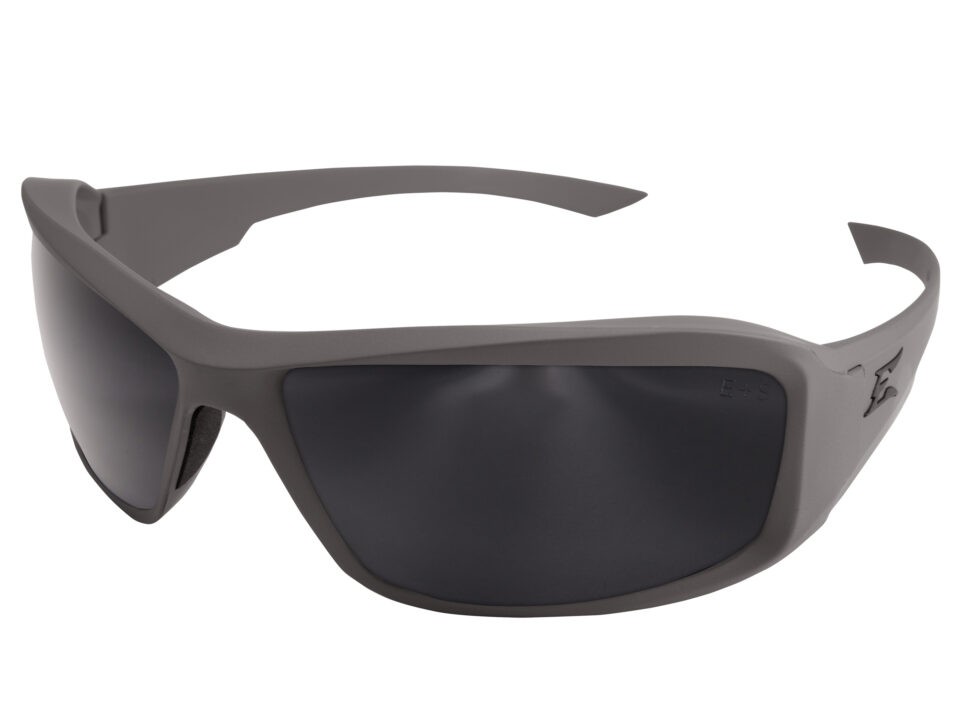 My initial contact at Edge was with Paul Carter who was very keen to get a review written in English as previous reviews were done in Europe and the Far East where Edge are very popular, not just in Airsoft but with the military and police alike. I was then contacted by Stephane Pitiot, President of ACCOM International who is managing the International business development for Edge Eyewear and we agreed on a way forward.

Edge Tactical Eyewear are not knew to this in fact it is the contrary, they have been making Personal Protection Equipment (PPE) for over 20 years out of there base in Layton, Utah – USA. They actually started their tactical range 5 years ago and have been going from strength to strength being extremely popular in Europe, America and the Far East. All the tactical lenses aside from the polarized and tested to the standards MCEPS, ANSI, Z87.1, EN166F and are also CE approved.

VS Vapor Shield is the Edge Eyewear anti-fog system which is not a regular coating or dipping it is permanent on both sides of the lenses which they claim is their biggest argument against competitors. More about this in the testing………..does it work?

TT Thin Temple are available on most models now this makes the arms on the glasses taper out to a thin, almost point. This allows you to wear the glasses very comfortably under a helmet or ear defenders like Sordins. Also very useful if you wear a baseball cap or any other kind of head gear.

Nylon Frame technology means the eyewear frames are very flexible making them very unlikely to shatter or snap when hit. I have lost count of how many videos of people testing Airsoft eye protection I have seen where they only shoot at and test the lenses. I’m lucky as I have never had any eye pro break on me but I have seen many incidents where it is the frame that has failed and not the lenses.

The TPR technology is only available on the Blade Runner model which also have rubber on the frames to prevent them slipping off your head. So enough of this let’s move on to talk about the models I was sent to test and review to see if Edge Tactical Eyewear are as good as they claim. 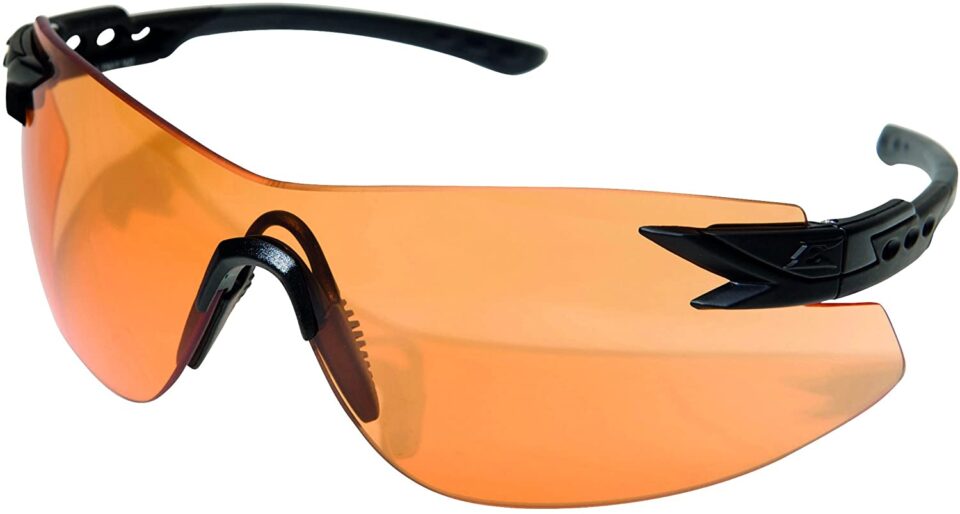 Sharp Edge, This model has a very similar look to some Sawfly or Oakley models they even come in a similar hard case. These have interchangeable lenses, dark (called G-15), clear and operator orange (called Tiger’s Eye). They also have the Thin Temple and Vapor Shield technology and came with a soft cleaning cloth in the case. The fit is very nice and they will easily fit under a fast helmet or any other kind of headgear.

Hamel, These have a classic kind of square shape to them and look very operator. Again they are very comfortable to wear with no slipping and will easily fit under headgear or ear defenders. They come with Vapor Shield and Thin Temple technology and available in various frame and lens colours. In addition to this you can get a foam gasket insert if you want to have them fit more snuggly and are simply clipped in, it takes 10 seconds and even less to remove them.

Notch, These are very much a similar design to the Sharp Edge but do not come with interchangeable lenses but you do have the option of different coloured lenses when you order. These also have the VS and TT technology and are also very comfortable to wear.

Blizzard, Now Edge don’t just make glasses but they also make goggles. The goggles are fully enclosed and can be fitted with a prescription insert for the players who need to glasses or contact lenses. The lenses in the goggles have a triple coating of Anti-Scratch (same as any Edge Eyewear model) so they should last you a while, another option is a field case that is adapted with molle attachments and is easily folded up. And these also have VS technology.

All the products I received and tested are MILSPEC.

There are other models to choose from see website for details www.edgeeyewear.com

So on to the really important part, are the claims of Edge Tactical Eyewear actually correct? The products arrived in less than a week from Edge in Utah, very impressed with that and were all nicely packaged and cam with a soft case/bag that you can also clean them with. I just want to mention that Edge Eyewear recommend that you only use a soft cloth or a very minimal amount of clean water to clean the lenses, no soap no detergents.

Prior to them arriving I posted up on Facebook that I would be on a live feed with the Edge glasses to showcase them to the Airsoft Community, at this point I hadn’t tested them. After unpacking the products I decided to do a bit of testing of my own prior to the live feed. I put all the glasses in the fridge for two hours because cold Perspex hates warms faces. After the time was up I removed the lid off the kettle and got it up to boiling. I then held each pair over the steam to see what would happen and to my absolute astonishment aside from a tiny bit of condensation that simply just dripped off the bottom. The second I removed them from the steam they were clear….very clear. Ok whilst they were in the steam there was a tiny bit of fogging but then when are you going to be playing in a sauna or kettle? I’ll be honest at this point I thought to myself, have I finally found Perspex eye protection that doesn’t fog up? I think I have.

So it was time to showcase to Airsoft players here in the UK. During the live stream I wanted to show the players how the Edge glasses perform in an actual scenario as not many players have a kettle with them when they play. I had two other brands of Perspex eyewear to benchmark them against and though a good test would be the balaclava test. So live on Facebook I put the balaclava on and tried the other brands, both of them steamed up within 10-15 seconds of heavy breathing, for purely scientific purposes of course. I performed the exact test on the Edge glasses live on air and after upwards of a minute I gave up, The Notch ones were the only model where I got a tiny bit of fogging but as soon as I stopped with the heavy breathing they immediately cleared. I simply couldn’t get them to fog up.

I also tested the frames, they are very flexible and durable surviving many shooting tests I performed on them as did the lenses. And all this is available in so many configurations to suit every player out there. 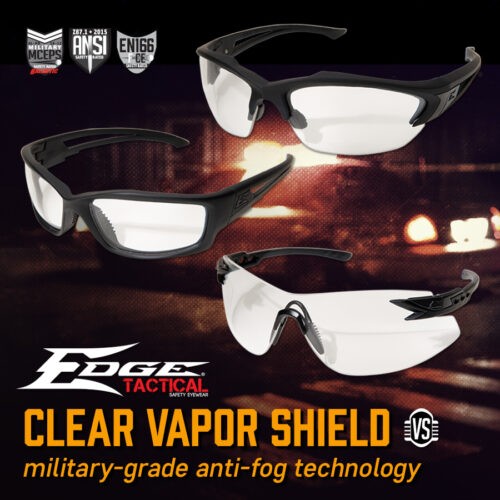 As many of you know I don’t pull any punches when it comes to testing and reviewing products, I would never say anything but what are find findings. Edge Tactical Eyewear have clearly thought long and hard about the design and technology used in their products. The usability, comfort and aesthetics of this eye protection is absolutely first class, I can’t fault it.

Huge thanks to Paul Carter from Edge Eyewear and Stephane Pitiot from ACCOM International for supply of the test products.

View all the Edge Tactical eyewear we have to offer here